A long, long time ago in a land much like this one there was a kingdom called TeleCom and it was led by an aging tyrant. This tyrant’s name was C. W. J. and he was both loved and despised by his people; he only chose to be nice when it suited him and most of the time he was crotchety and mean. The people of TeleCom would complain but the Government would reply that that even though he was a terrible ruler he was the only ruler they had so they had better put up with him.

Then one day a cold breeze from the north blew in D-Cel, a young and strapping hero who challenged C. W. J. to a duel for the leadership of the land of TeleCom. Because he was a new face (so much prettier than the old, ugly tyrant) and because he made many silver-tongued promises, the people of TeleCom fell madly in love with D-Cel and cheered him on during the long battle with C. W. J. The battle went on and on for years, touching not just the land of TeleCom but also the nearby kingdoms of Ecanami, Colcha and So-Siyiti. 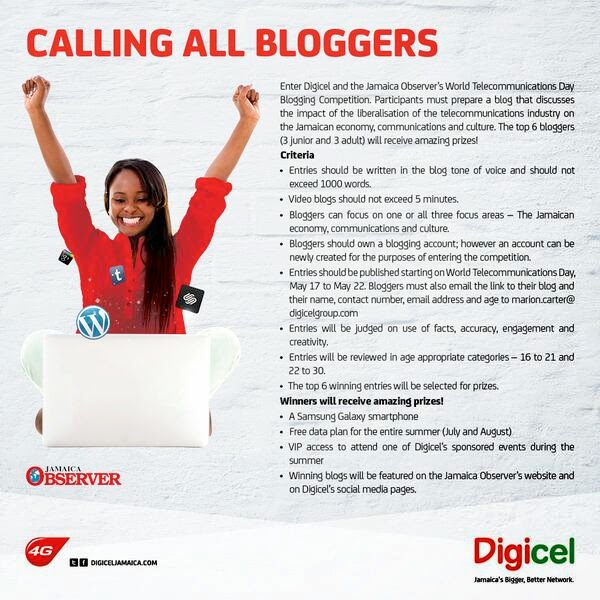 The word ‘monopoly’ always conjures images of some oppressive dictator bending victims to his will (look at Hitler, JPS) so that the breakdown of any such monopoly will always inspire satisfaction in the minds and hearts of its victims. The outcome of such breaks is often forgotten by the history books (because by that time the chapter has ended), but the impact of the liberalization often stretches further than one first assumes.

The Jamaican government liberalised the telecommunications sector in 2001 with acceptance of bids from Digicel and Flow. The emergence of two new companies would have likely meant an increase in the number of jobs available to the Jamaican populace. Indeed in 2010, Digicel boasted more than 1000 employees (Flow lagging slightly behind at more than five hundred).

The sudden increase in options for communication (cell phones, land lines and the internet) probably opened the doors for deeper interaction with investors both local and foreign, allowing Jamaica to experience more economic growth. It also likely helped that the new companies (and LIME, spurred on by it competition) were investing a lot of money to keep their businesses viable.

Communications expansion also means more avenues for business. The internet has become a thriving field of commerce and now Jamaicans can have a share of that pie.

Investing in community projects, education, sports, you name it has become a branding competition among the telecommunications providers. The attention really does benefit the groups it is heaped on and one of the greatest advantages of liberalising this sector has to be the urge these companies have to spend money on people. They’re reaping profits, for sure, but they also give back with relatively willing hearts.

The boost in reliability of our communication (thank you Digicel’s million towers; thank you Flow’s unbeatable online speed) has likely connected families in a way they’ve never been before. The oligopoly that telecom in Jamaica currently sustains forces competition and constant improvement, which is all to the benefit of the consumer. Reliable communication is also a boon to education and even though most of our graduates can’t get hired, at least they can read and write at the tertiary level thanks  to reliability of communication that got them into university and helped them get their degrees.

A downside is that the popularity of cell phones, especially expensive cell phones, means an increase in crime rates. Reported or not, way more cell phones are being stolen now than they were before 2001. Because everyone must have more than one cell phone (to straddle both networks) and because the desire may outstrip the means some people turn to crime to get what they want.

Brand Jamaica is splashed across text messages, across Facebook and Twitter and Instagram. Liberalising the telecom sector split us wide open to cultural exchange and export.

The instant exchange of information and our ability to stay connected anytime anywhere (thank you Lime and Digicel 4G networks) helps us keep up with the Joneses in North America. This is a good and a bad thing – we’re always following behind the USA peepeecluckcluck. Do we really need another avenue that lets us do that?

Lastly, I’ve been wondering if the shift towards cell phones and away from landlines (a shift that occurred primarily after liberalisation) makes us more likely to go out instead of sitting at home waiting for a call. This might not be a cultural change so much as a cultural facilitation. It’s a lot easier now to keep in touch when you’re out after 1AM but we’ve been partying late for years, only now we don’t have to miss out on chatting to friends while we do it.

Disclaimer: What I know about telecommunications and economy could fit in a newborn baby’s fingernail. What little I know of society and culture I have inferred from my own meandering experience. Digicel/the Observer asked for a blogging voice. Fiction is my voice. (At most, liberalised fact).

4 thoughts on “Once Upon a Time (a Telecom Tale)”