This may come as a surprise but in between the bonfires, spring fairs and medical conferences that have marked my weekends for the last few months I have actually found the time to read a book or two (or five).

I was recently tapped to write a set of book reviews for Susumba.com, an opportunity I leaped at (perhaps too hastily) which is partly why I come bearing book recommendations. In no particular order, here are three books you should definitely add to your collection for this summer and beyond.

Nicole Dennis-Benn is an expat Jamaican living in Brooklyn. Her wedding ceremony at a private resort made local headlines some years ago for the triviality of their being a lesbian couple. Only in Jamaica. Awkward home country reception aside, Dennis-Benn’s first novel is a keeper. Here Comes the Sun is a multi-generational narrative that exposes and shames the tourism industry in Jamaica for its exploitation of the working class and poor at the same time as it deeply considers the damaging standards of beauty to which we subject our girls.

Excerpt from my review:

Emboldened by the objectivity of distance, Dennis-Benn unflinchingly chronicles the troubling reality of the Jamaican feminine experience. She furthers this discussion by giving glimpses of the taboo – Margot’s love affair with the out lesbian Verdene Moore. Dennis-Benn’s handling of their relationship is understandably delicate, dancing nimbly around author surrogacy and Jamaica’s homophobic climate. The result is an intimate and acutely human portrayal of an oft-ignored struggle, woven beautifully into the tapestry of the wider work.

Delores, Margot and Thandi are moulded by the tragedies of their youth in a seemingly never-ending cycle that will be unsettlingly familiar to a Jamaican audience. In light of recent events regarding the abuse of girls and women, the timing of this novel is especially crucial. Often the story of sexual abuse victims is narrow and oppressive. In her novel, Dennis-Benn attempts to expand their narrative.

Children of the Spider by Imam Baksh

Full disclaimer, this is a YA novel. But don’t let the genre fool you – Baksh’s debut novel (which won the Burt Award for Caribbean Literature) is a fast-paced adventure that will keep you hooked until the last page, no matter what your age. Imam Baksh is a master of pace and plot and the eerie, menacing characters practically crawl off the page.

The novel centres around Mayali, a fugitive from the sulphur-and-brimstone world of Zolpash where her people are subjugated under the rule of Spiders and their Brethren. She escapes to our world (Guyana, to be precise) and enlists the reluctant help of Joseph, an Amerindian Deaf-Mute techie, to warn the Guyanese president that the evil Spiders are trying to take over the world.

I loved this story. It was so exciting to see Caribbean tropes (the bumbling policeman, the cranky taxi driver) be represented in fiction, and Baksh weaves mythology into contemporary Caribbean life the way Gaiman did with Norse mythology in American Gods (who else is excited for that premiere?!). Children of the Spider is almost definitely the adventure book of 2016.

In the Morning Yah by Sheldon Shepherd 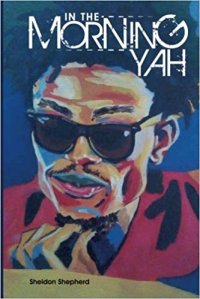 Known more popularly as the lead singer of the roots-reggae-dub collective No-Maddz, Sheldon Shepherd published his first collection of poetry in 2016. Including some original pieces by his father Keith Shepherd, the anthology also features the works of five visual artists who contributed pieces to complement the poems.

Shepherd’s poems are mostly observations on daily life and the hustle of making ends meet interspersed with reflections on sociopolitical issues and the occasional whimsical meditation on love. Reading dub poetry presents a Shakespearean challenge however because while Shepherd’s work is delightful and entertaining on stage the poems on page lack the energizing metre that brings them to life. Still, the book is an excellent repository for performance poems with a distinctly original voice.

Did you read any of these books? Know/love the writers? Have recommendations of your own? Feel free to share your comments below. :)

at the vanguard of building LBTQI advocacy and uniting the Caribbean

Chronicling the Life of Jamaican Missionary One Story at a Time