In games of waiting I am a sore loser
with muscles aching and contorted from
spasms of shivering
teased out by every cold breeze
each of them lovers – must be
to garner such
instantaneous, overwhelming reactions

There is nowhere to run,
only the cold confines
of this damn stone bench
pressed up against my backside
like some
unsolicited dance partner

I cannot wait
for this waiting
to be done.

An Open Letter of Complaint to the NWC and UWI Mona.

This drought is like the Never-Ending Story (without the awesome flying wish dragon, because we would all be wishing for WATER).

We are boiling, scorching, dusty, deprived and badly in need of showers. The halls of residence at the University of the West Indies Mona have been dropping like flies, succumbing one by one to the almost absolute water shortage. And you know once it hits New Post Grad, all hope is lost. It has been going on since early April (several weeks at this point), with no end in sight.

Mary Seacole is down to about 4 functioning bathrooms (for ~200 girls). Water pressure falls to unusable levels every midday to late afternoon and I am about to start learning Native American rain dances. (Unless we’re in Taino rain god jurisdiction).

Maybe I’m not being so melodramatic after all.

I may sound like a spoiled little city girl, but I need my running water. Can’t live without it. At night I cuddle up to the certainty that if I need to spring from my bed at 2AM to go do whatever it is girls do in the bathroom (and we’re not telling) there will be water in the taps. This certainty is gone, and I feel like I’m free-falling towards a bed of pointy, unwashed rocks. 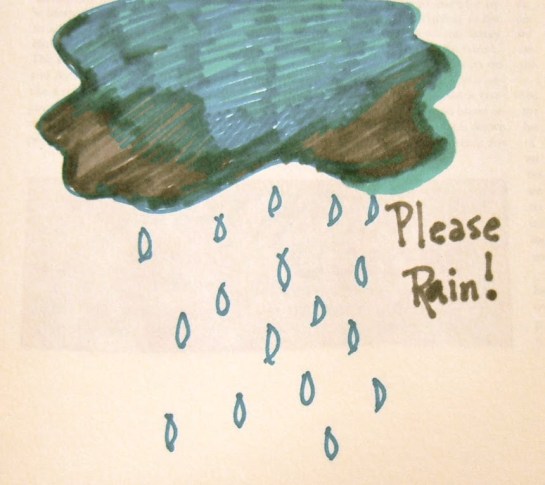 We need action. Of the  block road and bun tiya variety. I’m hesitant to call UWI out because the last time students got riled, some serious shit went down. But we are in dire straits. We can’t live like this for much longer.

Call the guild.
Call the principal.
Call TVJ.
Call Portia.
Book me a hotel room.
Book us all hotel rooms.

Something needs to be done and soon.

The title of this post is appropriate because, according to Google, Spanish Town has been experiencing rainfall for most of this week. Clearly their rain gods aren’t pissed at them. Get your act together, Mona.

It’s not just me, either: Final Year Student’s letter to the editor. If she thinks Mona only houses 600 students, she’s waaay off the mark. But otherwise distressingly spot on.

Updated to add: IT RAINED TODAY. MY BLOG HAS A DIRECT LINE TO THE RAIN GODS. :D

Sometimes it’s nice to just to stay at home, where the breeze blows cold and the Bajan rain sounds so different on the rooftops from Jamaican rain but it’s a good different, soothing-like, lulling me into a warm sleep ’cause I’m already wrapped up to my eyelashes in blankets and surrounded on all sides by love.

It has been my kind of weather all morning – rainy and grey and wet. My kind of weather as long as I don’t have to leave home, that is. Then I have to contend with shoes that let in water and umbrellas that I still get wet under. Umbrellas are such an ineffective method of keeping the rain at bay, anyway. I should invest in a raincoat and water boots. Galoshes are all the rage these days. I have my eye on a purple pair.

For all I know this is normal Kingston weather, but the phone calls from my mother asking what the sky is like down here have kind of clued me in that something out of the ordinary is going on. This out of the ordinary thing is the tropical storm that seems dead set on hitting Jamaica as a hurricane.

Allow me to give you a brief history of Jamaica and hurricanes.

The worst hurricane I ever heard about (Gilbert) happened before I was born. Before that one, no one used to take hurricanes seriously. After Gilbert? Recording artistes made a mint in hurricane tunes. But also, like any good immune system, Jamaicans were sensitized to the threat of impending disaster. If a trough so much as breathed in our direction there was a mad stampede at the supermarkets for bully beef and batteries.

If you stop a Jamaican on the road, they can tell you everything you need to do to prepare for hurricanes – where to put the birth certificates so they don’t get wet, when to cut down the breadfruit tree in your yard, how to stop your dish from blowing off the roof. We have it lock.

Coincidentally, since Gilbert, hurricanes have hardly ever hit us full force. Different people will give you different reasons for why this is so, but Jamaica is by and large a Christian country. So now whenever Jamaicans hear about a tropical storm watch, they don’t run to the supermarket any more. They run to the altar to pray that Jamaica gets spared. The track record is in their favour. Hurricanes have been known to perform metereological gymnastics just to avoid our shores.

The latest tropical storm, Sandy, is expected to reach hurricane strength by the time it hits us. Jamaicans might be flooding the supermarkets, but you can bet they’re thinking “Cheups, dis nah reach wi.”

Why is it that when it is raining, is always the people with umbrellas that feel they must walk under every awning on the street? The whole point of the umbrella is that you don’t need to cotch under the chiney man shop door like everybody else who don’t have umbrella. All you doing is getting everybody under there wet with the water dripping off your shelter on a stick, and endangering the eyes of everybody you pass.

All I ask is that you walk as close to the street as possible without making the drivers honk at you for scratching up their cars with your umbrellas. And leave the shelter to the cold and wet among us who couldn’t fork out the $250 to buy an umbrella from the umbrella man who selling them down the road.

at the vanguard of building LBTQI advocacy and uniting the Caribbean

Chronicling the Life of Jamaican Missionary One Story at a Time

"I'd rather be reading"