Barbados is lucky enough to have one side of their coast laved by the gentle Caribbean sea and the other side crashed furiously upon by the wild Atlantic ocean. I am lucky enough to see both these fantastic shorelines during my stay.

On Thursday and Friday I visited the beach at Accra (in Oistins). Yes, that’s right. I went to the beach two days in a row. I’m on vacation, sue me. I was expecting the same gently rolling waves we experience on beaches in Montego Bay but the surf was determined to play rough. It crashed on rocks and people in equal measure, so much so that there was a continuous sheen of mist hanging above the shore.

Amateur and experienced surfers tried their hands at waves that made Mobay look positively geriatric. Swimming was next to impossible for me and I ended up just rolling with the waves, which was incredibly exhilarating in its own right. Or maybe I’m just easily amused. There was an overwhelming abundance of tourists on the beach, but that was to be expected when quite a few hotels opened right onto the sands.

But the boardwalk has got to be my absolute favourite part of the beach at Accra. It’s a 1.5km walkway that stretches from Accra almost to Bridgetown. I enjoyed walking along it, feeling the mist from the crashing waves and watching tiny crabs scuttle into the rocks. 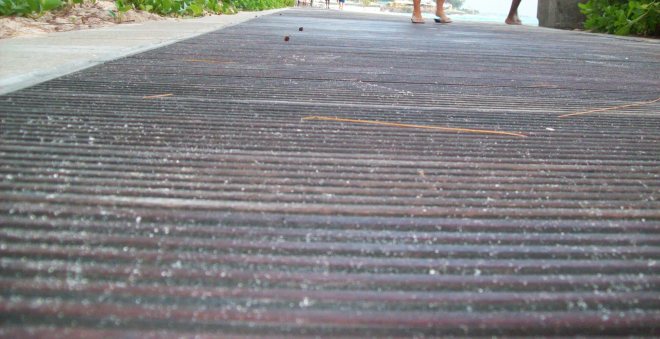 And I’ve no idea how to end this entry other than by going on about how amazing Bajan beaches are but that actually makes me feel like a traitor to my homeland, so I’ll just stop here in this awkwardness and leave you a silly/cute picture of footprints side by side in the sand.

2 thoughts on “Down by the board walk, down by the sea”